Planning sketches of the Rib and Visor digital musical instruments by Joseph Malloch.

The Ribs and the Visors are “prosthetic” digital musical instruments developed for the collaborative project Les Gestes, in which we endeavoured to design new instruments for dancers.  The new instruments extrapolate from the T-Stick, which we had already used in the performance Duo pour un violoncelle et un danseur with the same collaborators. Starting with corrugated-plastic prototypes, the Ribs, Visors and their companion instrument the Spine were developed iteratively using participatory design through frequent workshops, parallel problem solving, and digital fabrication methods. The current models are fabricated from laser-cut transparent acrylic and polycarbonate. The entire structure is mostly assembled using solvent-welding, and custom 3D-printed mounts and clips were used for attaching the instruments to the dancers’ costumes.

CAD images for laser-cutting and engraving acrylic for the Rib and Visor DMIs. 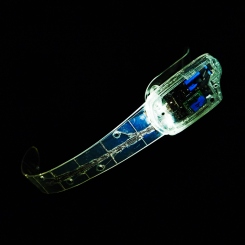 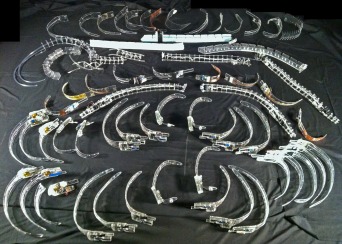 Many of the instrument prototypes and production instruments created during the project Les Gestes.

Each of the instruments uses both movement and multitouch sensing, with the MiniBee wireless mote coordinating data-streaming.  Mapping from movement/gesture to sound was developed with the composers during intensive workshops, supported by several other tools we have developed: libmapper and a graphical mapping interface. Each Rib or Visor outputs nine different parameters available for mapping.

There are a few brief shots of the ribs and visors in the videos below: